10 years since the Samoan road switch

by Australian Road Research Board on September 5, 2019

It’s the 10th anniversary of one of ARRB’s most unusual, yet rewarding projects.

On September 7, 2009, Samoa became the first country in more than 40 years to switch the side of the road upon which its vehicles are driven (from driving on the right to driving on the left).

In preparation for the switch, ARRB was commissioned to provide an independent review of the planning and proposed actions and identify any immediate safety risks. This work ultimately helped the switch become law and allow the change to go ahead at daybreak on the day. Ten years have elapsed, and the switch was soon declared a success. 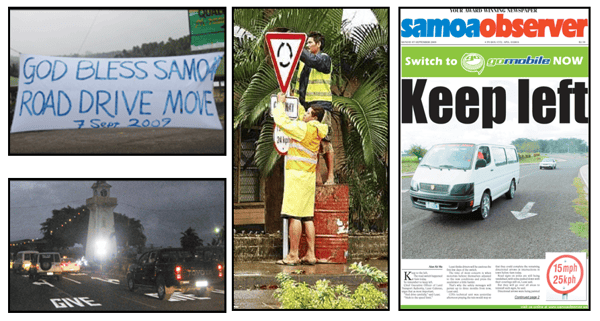 ARRB’s Paul Hillier and David McTiernan, of the Transport Safety Group, delivered the project and both consider the project among the highlights of their career.

‘It was an amazing experience – definitely a career highlight!” Mr Hillier said.

“Being commissioned for this work was a huge recognition of ARRB’s track record in the road safety arena and its integrity in providing independent advice. Being given total, unhindered access to engineers and government officials was testament to this. It was an interesting project – certainly not one you get every day - and obviously a cookie cutter approach simply wasn’t going to work.”

So the team had to apply first principles and come up with robust conclusions, knowing that with strong opposition to the switch, their work would ultimately be tested in the Supreme Court, such was the importance of the issue to the nation.

“While the stunningly beautiful landscape and consistently optimistic and colourful people were compensation and will remain lifelong memories, it was two weeks of extremely hard work, often 12-14 hour days, with regular communication with the Attorney General and his department,” Mr Hillier said.

“To receive the thanks of the Prime Minister shortly after the switch was a big endorsement of our work, with satisfaction knowing that we’d helped to shape Samoa’s transport future.

“The 10 years since has flown by and I am still extremely pleased to be within the Transport Safety team at ARRB.”

ARRB’s David McTiernan said the opportunity to work with the Samoan Government was an honour and professional highlight.

“The importance of getting the arrangements right for such a momentous change in road traffic was understood by the office of the Attorney General as a nation-building idea, something to improve the life of the average Samoan by making access to transport more affordable,” Mr McTiernan said.

“Since this type of change had really only occurred once or twice since cars had become the dominant transport mode, the challenge for us was to firstly research how this approach was applied by others, taking the lessons of that experience and then applying to Samoa and their circumstances.

“It was my first time visiting a South Pacific nation and the people we worked with and met in the Government agencies were sincere in welcoming us and gave us their time and support to help us to understand their preparations for ‘The Switch’.

“In the end, while ARRB provided a comprehensive report about what was needed, we could see that the Land Transport Authority and the Samoan Police had things well in hand, leaving us to provide them with the reassurance that we expected everything to go well.

“And by all reports it did and the nation of Samoa used the 7 September as a celebration of the community coming together!”