by Australian Road Research Board on July 26, 2017

On the evening of the 21st July 2017, the Inaugural ARRB Gala Dinner and Awards Night took place at a beautifully presented space within the Sea Life Melbourne Aquarium.

It was pleasing to see nearly 200 guests from industry, academia, media, as well as several VIP guests - all eager to hear the announcement of the 2017 award winners.

The organisers wish to thank Roads Australia and IPC Global for their sponsorship of the event, Roads & Civil Works for their participation as media partner and the many special guests, including:

The first two awards to be presented were the Australian and New Zealand Driverless Vehicle Initiative (ADVI) – State Innovation Award for Victoria, followed by the National Road Safety Partnership Program (NRSPP) sponsored award, based on the Re:act campaign.

The ADVI award recognises an organisation that has initiated, developed or delivered a new and innovative piece of research, product, program, service, legislation, business model or other innovation or achievement that has, or will play a key role in accelerating the safe and successful introduction of driverless vehicles on Australian roads. This year’s proud winner was named Bosch.

The winner of this award, Lucy Boehme, took the audience through her campaign as well as the inspiration behind it and its progress over the past month.

Afterwards, the much anticipated ARRB Awards component of the evening took place. For this, the organisers wish to thank the guest judges who they believe had the most difficult job of all: Ms Julie Mitchell Chief Engineer at TMR Queensland, Ms Mary Lydon Chief Scientific Adviser at ARRB, Mr Dave Jones, Manager Roads and Traffic at RACV and Dr Mike Shackleton Acting Chief Research Officer at ARRB. 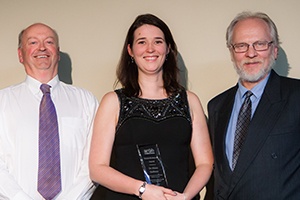 Congratulations to each and every award winner and finalist for their significant contributions towards the roads and transport sector. It is hoped that this Awards Night is the beginning of a longstanding tradition of recognising and celebrating colleagues and peers in this industry.

More photos from the event can be viewed via the photo gallery.

Nominations for the 2018 Awards will be open shortly, so please do watch this space or contact