All aboard the Flinders Express

by Australian Road Research Board on August 17, 2018

25 South Australian school children have just experienced the wonder of travelling in a driverless vehicle.

Last week, under the watchful eye of parents, students from Glen Osmond Primary School in South Australia enjoyed a first-hand glimpse of what a future ride to school may feel like in a driverless vehicle. 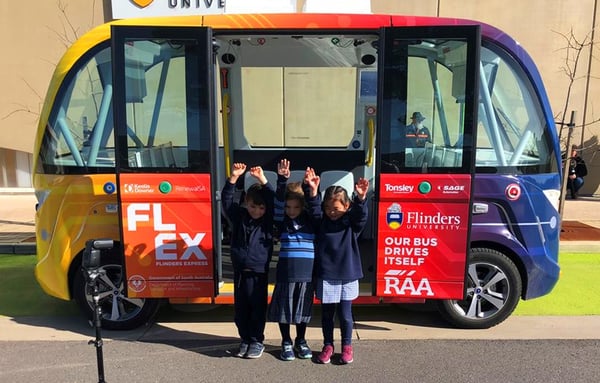 Rita Excell, Executive Director of ADVI, said it was interesting to contrast the eagerness of the students with the reaction of their parents, especially with a recent survey showing that having a child riding in a driverless vehicle remains one of the greatest concerns for most people.

“A recent ADVI-commissioned survey involving more than 6,000 respondents from across Australia and New Zealand showed that more than 85% of people had a level of concern when it came to allowing a child to ride in a driverless car by themselves.” Ms Excell said.

“That is why it is important to provide an opportunity like today’s event to people of all ages to see this technology in action. It is one thing telling people that driverless vehicles offer major safety benefits, will reduce congestion and have a profound effect on how we get around but letting people experience this first-hand is so much more powerful because it helps them to better understand what that all means for their own circumstances,” she went on to say.

It is fantastic to see trials underway in most parts of Australia to put driverless vehicles of all shapes, sizes and uses through their paces, and identify what technology best suits our unique Australian conditions. Australia now has at least 15 connected and automated vehicle trials and pilot programs underway across the country.

The Flinders Express opened to the public on Wednesday 20 June and the driverless shuttle recently recorded its 1,000th passenger journey.