by Australian Road Research Board on March 30, 2020

Asphalt made using crumb rubber from old tyres has been laid on a busy Melbourne road as part of a major new trial involving the Australian Road Research Board.

The project is funded by Tyre Stewardship Australia (TSA) and the Victorian Department of Transport (DoT), with ARRB to conduct the two-year trial.

“Australia generates the equivalent of 56 million used car tyres every year. Around 30% of those end up in landfill or are stockpiled,” TSA CEO Lina Goodman said.

“Finding innovative and sustainable ways of using old tyres is vital and crumb rubber asphalt roads are the perfect solution to a waste problem."

Spray seals incorporating crumb rubber is proven technology on country roads in Victoria and in many places overseas. The aim of this project is to increase the opportunity to use crumb rubber asphalt on high traffic roads.

The trial is in line with the State Government’s Recycled First policy, which aims to increase the use of recycled materials in construction projects.

“Crumb tyre rubber when added to an asphalt mix, not only assists with the reuse of a waste stream but it actually adds value to the road structure,” ARRB chief executive officer Michael Caltabiano said. 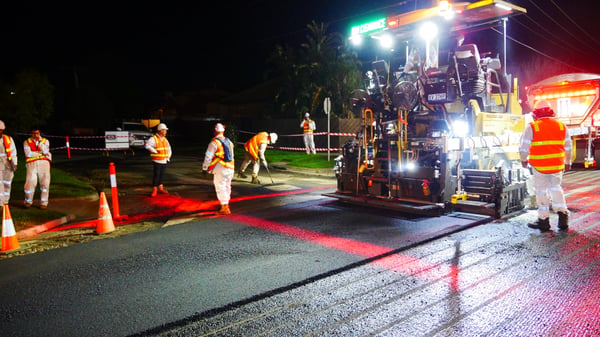 The asphalt has been laid throughout March on a 1.4 km section of East Boundary Rd in Bentleigh East, in Melbourne's south-east. It is on the southbound carriageway, between Centre Rd and South Rd.

The trial consists of four different crumb rubber asphalt mixes and two asphalt control sections. The equivalent of around 1,600 car tyres will be used in the trial.

The trial is believed to be the first of its kind in Australia based on the scale of the project and number of mixes trialled at the same time.

Lab and field testing will be conducted at regular intervals with a final report due by mid 2022.